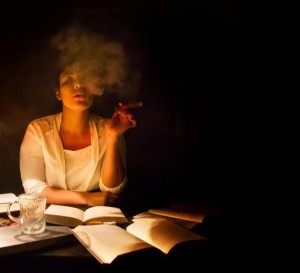 Q: Your production, LOU, which recently ran at The Paradise Factory, is masterful. What was it that drew you to writing this show?

A: Thank you! I was immediately intrigued by Lou Salome’s life– her story is incredible and my play only scratches the surface of her many accomplishments and adventures. However, what drew me in personally was her mentor-mentee relationships with Nietzsche, Rilke, and Freud, and how they changed and developed her work, and the work for which these men would eventually be known. Like myself, and probably many of us, I saw her repeating the same patterns in relationships, which instantly connected me to her humanity, and that’s where I started.

Q: When you originally wrote this production, did you have the concept of using an all female cast in mind?

A: Yes. I’ve only met a few people who have heard of Lou Salome, and those people only knew her because they had studied Sigmund Freud or read a biography of Friedrich Nietzsche or Rainer Maria Rilke. In this way, her story was only told through the men in her life. I felt that using an all-female cast would give her the power to tell her own story. Additionally, there is something about reversing gender roles in this piece– hearing a woman “man-splain” something or not take no for an answer– which prompts us to adjust our currently-accepted societal lens for a moment and really consider if we’ve come as far as we think we have.

Q: You managed to find a great balance between diving into the intellectual aspects of the story and exploring the interpersonal connections of your characters. Was this something you kept in mind while crafting the show?

A: Yes, absolutely, I spent the better part of a year doing research to make sure I had a working understanding of the psychology and philosophy she mastered; however what was really important to me was the humanity of these historical giants. They were fallible and funny, and I felt that the only way I would care about the science and philosophy, as an audience member, is if I first cared about the people doing the talking.

Q: What, would you say, was something that was unexpected/ surprised you once you saw your script realized on stage?

A: Oh, so many things, but most notably certain characters that in my head were minor, suddenly weren’t anymore. These actresses took and created full arcs for them, and they now were some of my favorite moments of the piece. Additionally, the humor was unexpected. I wrote in little things into the discussions between characters which I thought were funny, but it surprised me how much the audiences enjoyed them.

Q: Do you have any upcoming plans, for LOU and/or for a new production, in mind?

A: I think a play with 6 strong roles for women about a historical figure with minimal set requirements would do well in a university setting, so I have a few people helping me with that project. As for a new production, I’d love to see another NYC-based company put it up. I recently saw Joan of Arc at The Public, so obviously strong female historical figures are still a huge interest for the NYC theatre world, and I think LOU could find a home here.