In conversation with Adam Kaar about, the new production ALTERNATING CURRENTS as well as about The Working Theater and upcoming community events. 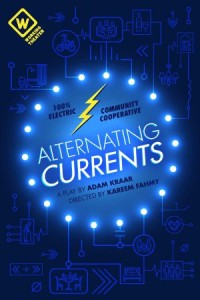 Q: What motivated you to write Alternating Currents?

A: I wanted to work on a project with The Working Theater because of their mission to reach audiences who don’t usually attend theater.  I really believe theater at its best is a popular art, rather than something for a specific demographic – yet getting plays in front of a diverse audience in this city is difficult.  The Working Theater is addressing that challenge head on:  by creating new plays informed and inspired by communities of working people in NYC – and bringing those plays to those communities.

And then:  I spent a season getting to know Electchester, the community in Queens where the Working Theater’s “venue partner” is.  The stories I heard from people there led me to a story I needed to tell.

Q: How has the fact that you grew up living in various countries influenced your work, if at all?

A: Growing up overseas – and then returning to America and feeling like a foreigner here – has been a major influence on my work.  I’m very conscious of what it means to be “an outsider,” and most of my work deals with intercultural clashes and connections, and the challenge of various kinds of boundaries.  Many of my recent plays focus on American families living overseas – or the culture shock they experience when they return to the U.S.

For this project, visiting a community in Queens most people in the city have never even heard of was not unlike going to a new country!  My perspective of being a “foreigner” who seeks to make a home in a new land definitely informs the story of Alternating Currents.

Q: The Five Boroughs/ One City initiative is a wonderful project involved in celebrating and connecting communities, can you tell us a little bit more about that?

A: The initiative was launched in 2014 by commissioning five teams of writers, directors, and installation artists.  Each team’s goal was to create a piece of theater rooted in a neighborhood in each of the five boroughs of New York City.

Central to the process was a sustained involvement with a specific community – which involved everything from story circles to theater workshops to participating in community events.  For my team, that also included visiting residents in their apartments, hanging out in a Community Center at a nearby housing project, and attending Electchester’s awesome Christmas tree lighting. Those experiences inspired the play that I wrote, which will have its first performances at a union hall at Electchester and then tour to the other boroughs, including an Off-Broadway run in Manhattan.  The idea is to see how the concerns of one neighborhood may somehow speak to – or challenge – people in other parts of the City.

Q: How can people become involved with this initiative?

A: There are a number of upcoming events in each of the five boroughs intended to involve community members, as resources for the plays as well as opportunities for local talent to be seen and heard and to engage over a meal in neighborhood dialogues about the theme of diversity that is central to the play.  The Working Theater’s Facebook page has ongoing information about ways to get involved – or simply contact Tricia Patrick, Working Theater’s Community Engagement Coordinator at tricia@theworkingtheater.org or at 212-244-3300.

Q: Please tell us more about the two upcoming community events that will be hosted by Working Theater.

A: The Working Theater is in the process of hosting two community engagement events in each borough in partnership with Working Theater’s venue and community partners. The first is what Working Theater is calling a Community Shine. The Community Shine was created to celebrate the arts and artists found locally in each of the neighborhoods in which the plays are performing.  Local residents joined together at an open mic to share their individual talents in a community setting and to find out more about Alternating Currents.  Each of these has already happened but there are four more events coming up.  These will be community dialogues focusing on one of the main issues in the play:  how communities deal with increasing diversity.  It is fascinating to see in what ways, in a culturally diverse place like New York City, this theme continues to reveal itself.  These events are aimed at directly serving each neighborhood with whom Working Theater is engaged and deepening the cross-borough conversations.