An interview with Thomas Sullivan who has recently made his Off-Broadway debut in Scott Elmegreen and Drew Fornarola’s play STRAIGHT. 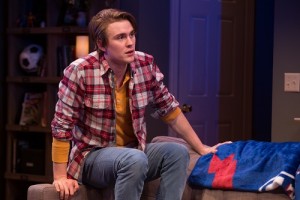 Q: Congratulations on this being your Off-Broadway debut. Can you tell us a little bit about what this experience has been like for you?

Q: As a Los Angeles born actor what are the biggest differences and/or similarities that you have found between Los Angeles and New York?

A: Los Angeles was an incredible place to grow up; lots of space, plenty of sunshine, by the beach, etc. That being said, I love New York. It’s just well rounded in a way LA isn’t, and commuting is a breeze. I know plenty of people who don’t mind sitting in their cars for hours and hours a day, but give me the M train any day of the week. Anything but the never ending rush hour out west. It may seem like a trivial complaint, but some of the best advice I was ever given was “enjoy where you live”. If you don’t, you drag that anxiety into the audition room with you.

Q: STRAIGHT deals with a lot of relevant and sometimes sensitive topics in today’s culture. How did you, as an actor approaching work of this kind, prepare for such a role?

A:  I approached STRAIGHT as I would any other play; ‘sensitive’ topics are an actor’s bread and butter, so naturally I was thrilled to get to work on this fluid, charismatic character.

Q: What is it that you think audiences will leave with after having seen STRAIGHT?

A:  Audiences will certainly leave with ‘What Ifs’ after the show. I’ve never been a part of any project that has so consistently garnered such a response. We’ve been told people debate the finer points of the production the entire train-ride home, and that just thrills us.

Q: What is the most important thing that you hope to convey to audiences with your performance?

A: My performance is just one part of a multi-faceted production, filled with the talents of dozens of people. If there was one thing I wished people would take away from the production as a whole, it’d be the almost forum-like discussion that is created at the theatre after some shows. The atmosphere after the curtain inspires dialogue between the audience members in a way I’ve never seen before, and it’s very, very exciting to be a part of.