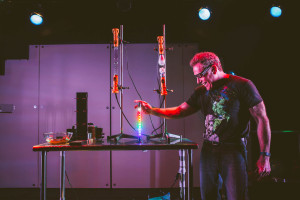 Q: What was it that inspired you to create this show?

A: The Creation of the show has actually been an evolution more than just a strict ‘ I want to do this on Off-Broadway’. I have been doing these for a good twenty years via Rutgers University. I have been at Rutgers for thirty years. For the first ten years I put together a nice selection of demonstrations all that physics, you know, used in the classroom. I realized that this worked very well in getting people excited about science. I’m not just talking about kids, although kids are our obvious audience, but also I do senior centers, libraries (which are full of adults) and everybody always reacts positively to being engaged about this. Science also in the last 20 years seems to be more on people’s radar. Eric Krebs (producer) saw one of my productions at Rutgers about 15 years ago and mentioned at that point that it could be a very nice theatrical production for Off-Broadway. My life was much too busy at that point and I didn’t take it all too seriously. Fifteen years later he approached me again and I said ‘yeah let’s give it a shot’.  So we talked through the summer and basically, I know what works now, over the 20 years of doing the shows he said which we should use- based on production and technicality. We then started the production of the show itself and the rest is History.

Q: During the show is there a favorite demonstration that you have?

A: To me the apex of the show is when we talk about what to believe and not to believe and how to think about life and how we think about things. How we approach life; we learn best by trying things. So to me the apex is the smoke rings because in a way it allows me to bring home not only that there are things we don’t see and why science is so much fun because then we can see it but then also there’s sometimes effects which we don’t see also but something is going on. 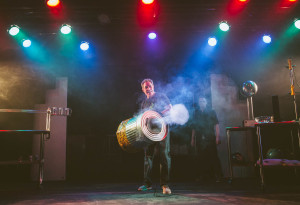 Although that is an obvious notion when you think about it you don’t always consider that. So then to show them exactly what it is and see the excitement about that and explain all the different ways that, that actually works to me that gives it the feeling that I really want them to have and from that point on it’s just a nice ride all the way out I think. I really enjoy and have a lot of fun opening people’s eyes. That to me is the reason to do this.

Q: What was it that made you first fall in love with physics?

A: Looking through a telescope at the age of 11 with my dad in the wintertime- that’s the best time to look at the stars, cold and brutal out there. I saw Saturn and then from that point on I was like ‘Wow, I just love this’. Here is something I hadn’t seen and I didn’t realize how pretty it was, I mean, you see pictures, but here it was in reality. You’ll note that I don’t use any simulations during the show. I don’t use any Powerpoint, I don’t have any videos or animations of what we are trying to do here. I would rather bring the reality home and I think that really is what made me a scientist is that there are these things here that are so cool.

Q: You mentioned that it was a long process to bring this show to where it is today but when you finally decided to do this Off-Broadway run what was the reaction?

A: I’ve been involved in the media in many other ways, I’ve been doing TV for about five years now. So I had done so much in the media, there’s been a lot of articles about me and my efforts to engage the public in Science and all of my shows at Rutgers and around the state of New Jersey and here in New York and also the TV exposure and doing a lot of these things on video so people were kind of used to the fact that I was trying to expand the reach of my physics demonstrations. My family, my friends they said “Wow that’s really cool, we’re excited.” My peers at Rutgers and the people I work with in my department were kind of not so surprised but at the same time they were like “Wow, you’re going to try this? Good for you.” The people I worked with around the country who do this very thing were really into this because it takes what we do to a different level. So they all kind of looked at it a little differently but they were all positive. Most people thought it was kind of crazy because of how much work that was and I don’t mind that. I’m known as someone who is fairly intense and also high energy and I am. So I actually took it as a personal challenge and a physical and mental challenge in order to actually achieve this. I thought that would be fun. Look I’m 55, there’s so much in my life that I have achieved and been successful at but here is something no one has ever done before so I thought let’s take it to this level, let’s see what will happen. It means work but so what. If I have the ability to get that many people to come to the show excited about science and think about things in a way that they don’t normally think about them, well, I think in a way that’s a positive effect.

Q: You mentioned that you did the TV show. I read some of what that was about and your show with the National Geographic. What was that experience like for you?

A:  It was both frustrating and enlightening and fun. I really enjoyed it as an exercise. It was very flattering. People involved in this world are very interesting and it’s from a different side that I had never seen. I thought that was very eye opening. It was frustrating because there were many times that I thought we could do things better and that wasn’t my role there. They didn’t really want to have the real effect achieved. It was maybe sometimes too expensive or something that was just a little too hard so instead they would shift and say “We could fake this” and I hated that. I really like to do but I understood. That was their role.

Q: What is the next step for you with THAT PHYSICS SHOW?

A: I see this as something that can grow in a way that could perhaps bring this to different cities around the country. Perhaps if we made it a little more fantastic it could even be a Vegas type thing. I think it would succeed almost anywhere we put it on. I think we are proving that it works our next step is to expand how we do it. Eric’s end goal is really to have our own theatre here in the city that we design around the show to really maximize the effect of the demonstrations and also the presentation. I would love that. At the same time I understand there’s money realities and things that have to come first. I think we have quite a future here.

Q: Why do you think that people should come and see THAT PHYSICS SHOW?

A: Because physics is really part of what their world is and to understand a little bit more about your word in a way that you don’t normally see I think is very important. Opening your eyes to the beauty of the things around you. To take physics and defang it a bit. It’s not really this nasty little science that somebody mean tried to make you learn and poured numbers down your throat. It’s really the beauty of the universe and the reality of the universe too and the combination of those two things we expose here in the show and I think that’s why the show really works and why people are excited after seeing it.