I met with the talented visionary, Mia Joshi, to discuss EMIT’s ‘The Chroniker’. 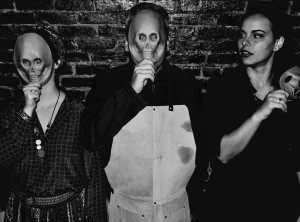 Q: What has the process of adapting and directing The Chroniker been like for you?

A: Amy Frey crafted a rich world of characters and complex puzzles in her original script for The Chroniker which was originally produced by EMIT as a customized private party. The immersive theatre element of interacting with the characters and the tangible world of the play, combined with having party guests solving puzzles as they progressed through the story was a hit! EMIT continues to produce unique customized parties for both children and adults. Now that we are adapting The Chroniker for public performances in the East Village at Solas Bar, my directorial focus was to take the main themes and characters and make them more sinister. We have an amazing cast that is devising the core action with me in rehearsals. Gianna, EMIT’s artistic director, and I decided to take inspiration from the space at Solas, so we are setting The Chroniker in a Victorian-Era gin distillery.

Q: Immersive theater has been growing in popularity in NYC over the last few years. What is it that drew you to Immersive Theater?

A: I am drawn to EMIT’s mission of using immersive theatre to increase literacy and comprehension for students. Immersive theatre has grown in popularity among adults but I believe that EMIT’s productions are truly unique since they are both immersive and mobile, which means that they can easily be brought into the school environment. Students are able to identify with the characters in a deeper way when it is brought into the familiarity of the classroom.

Q: Can you expand a little on what EMIT (Educational Mobile Immersive Theater) is?

A: EMIT (Educational Mobile Immersive Theatre) is a nonprofit theatre company that creates immersive theatre productions for New York City area schools and communities. We provide curriculum, materials, and pre-show workshops for teachers and facilitators to review with students before performances. Our current research has shown that 97.8% of our students leave our immersive productions describing themselves as having a clearer understanding of the text verses a standard production. This research, conducted by EMIT’s artistic director, Gianna Cioffi was awarded the Edward W. Sttit Memorial Fund grant for demonstrating excellence in research in an educational field in 2016.

Q: What do you believe audiences will take away from The Chroniker?

A: I want audiences to leave The Chroniker exhilarated by the competition of racing the clock to solve puzzles in a high-stakes scenario. From the moment they enter Solas bar and get their drinks they will be transported to our Victorian-Era story. I also want audiences to know that by attending The Chroniker they are supporting New York City arts education programming. For example, EMIT produced an interactive and accessible production of A Midsummer Night’s Dream this past summer for both children and adult individuals with developmental disabilities. Purchasing a ticket to The Chroniker insures that EMIT can continue to provide these very important productions to New York City schools and communities.

Q: What has been your favorite New York Moment?

A: My favorite New York moment was adopting my dog, Hudson, from the New York ACC. The ACC has a mobile van that travels around the city with shelter animals for adoption. When they opened the window to the van, Hudson was jumping up and down inside. I knew that I wanted to adopt him as soon as I saw him. Hudson is a New Yorker through and through. He loves chasing pigeons and splashing in open fire hydrants!