NOT THAT JEWISH, the new hit off-Broadway comedy written and performed by Monica Piper, is currently playing off-Broadway at New World Stages (340 W 50th St, New York, NY 10019). Tickets are now on sale through April 30, 2017. Performances are Monday and Thursdays at 7pm; Friday and Saturday at 8pm, with matinees Thursday and Saturday at 2pm, and Sundays at 3pm. Tickets range from $49-$79 and are available online at www.NotThatJewish.com or by calling Telecharge at (212) 239-6200.

A hit with audiences and critics alike, The New York Times raves “…the comedic high points are delicious,” The Huffington Post calls NOT THAT JEWISH “very funny and very real. Piper may not be that Jewish, but with this outpouring she’s that good,” and “Endearing, witty and quick. You only stop laughing long enough to cry.” WOR Radio raves “you don’t have to be that Jewish, to love Not That Jewish. I’m taking my mother! I encourage you all to see this show.” The Jewish Standard raves “Not That Jewish’ is Plenty Jewish. Funny and sweet. An entertaining lifetime of experiences,” while Jewish Week describes Piper’s performance as “hilarious, moving, sensitive and nuanced.” Joan Hamburg of ABC Radio calls NOT THAT JEWISH “a real treat! We laughed like we haven’t laughed in a long time. Everyone can relate. I had a wonderful time.”

NOT THAT JEWISH is the hilarious new comedy written and performed by Emmy Award-winning and Golden Globe nominated writer, actress and comedian Monica Piper, directed by Mark Waldrop (Howard Crabtree’s When Pigs Fly, Bea Arthur on Broadway: Just Between Friends.) Piper stars in this autobiographical ride of a Jew’ish’ woman’s life. From her show business family in the Bronx, to a WASP wedding, to her first step on a comedy club stage and life as a single mom, Piper shares the milestones and moments that shaped her life with the same signature wit found in her writing on “Roseanne,” “Mad About You,” and her Emmy Award winning work on “Rugrats.” Reminiscent of Billy Crystal’s 700 Sundays with a peppering of Neil Simon’s Lost In Yonkers, NOT THAT JEWISH is 90 lightning-fast minutes of funny, moving and inspirational theater. 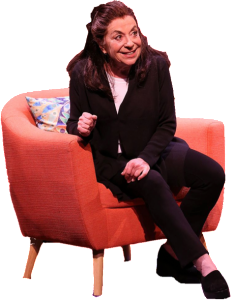 Monica Piper began her career studying improv with Second City in Chicago, and performed with “Sons of the Sunset,” and “Papaya Juice” in San Francisco, before going solo as a stand up and becoming one of Showtime Network’s “Comedy All Stars.” Her Ace Award-winning Showtime Special, “No, Monica… Just You” was nominated for an American Comedy Award. Piper went on to become an acclaimed television writer, eventually becoming the showrunner of the #1 children’s animated series, Rugrats, for which she won an Emmy.

NOT THAT JEWISH was originally commissioned by Jewish Women’s Theatre and received its world premiere in Santa Monica, CA on November 13, 2014.