After a journey more than 20 years in the making, RUTHLESS! THE MUSICAL opens Off-Broadway on Monday, July 13th at St. Luke’s Theatre. RUTHLESS! first appeared Off-Broadway 23 years ago at the Players Theatre, winning both the Drama Desk Award for Best Lyrics and the Outer Critics Circle Award for Best Musical. Most notably, the production featured a few young girls in the role of Tina whose names might be familiar to contemporary audiences, including Britney Spears, Natalie Portman and Laura Bell Bundy. Recent Tony-winner Annaleigh Ashford also took on the starring role at the Denver Center for the Performing Arts in 1995.

And today, the photos of the new production are in. 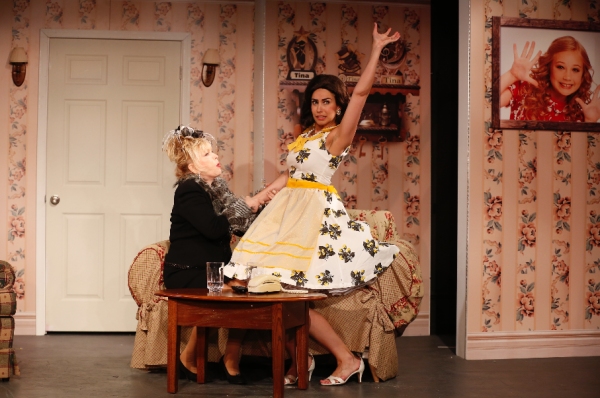 When THE BAD SEED meets GYPSY it’s fun for the whole dysfunctional family! Tina Denmark is a pretty, charming and diabolical eight-year-old who “was born to entertain.” With the encouragement of slick and overbearing potential agent Sylvia St. Croix, Tina will do anything to play the lead in her school play. The question is, where does such remarkable talent and unstoppable ambition come from? The answer is shocking in this award-winning Stage Mother of all musicals.

But make no mistake – this is not your mother’s RUTHLESS! This is no mere revival, but a newly imagined meditation on narcissism, talented tykes and stage mothers in a world that has since been introduced to such gems as “Toddlers and Tiaras” and Honey Boo Boo.

This version of RUTHLESS! is the one co-creators Joel Paley and Marvin Laird have long envisioned. As Paley explains, “Before it became a full musical, it was a long one-act but, in the transformation, it became a two act musical because that’s what was required to get it Off-Broadway. In this staging, we’ve done away with the intermission and have streamlined it into 90 minutes that is roller-coaster sharp and fast.” So reinvented is this new edition of RUTHLESS! that Samuel French is publishing the revised version to coincide with this summer’s Off-Broadway opening.

Book and lyrics for RUTHLESS! are by Joel Paley with music by Marvin Laird. Joel Paley also directed the original production as well as productions in L.A., South Beach and the record-breaking concert event starring Bernadette Peters. He will once again serve as director of the newest incarnation of RUTHLESS!, with Marvin Laird on board as music supervisor as well.

RUTHLESS! is produced Off-Broadway by Maxine Paul, Evan Sacks and Ken Schur. The playing schedule is Mondays at 8 PM, Thursdays at 7 PM, Fridays at 8 PM, and Saturdays at 2 PM at St. Luke’s Theatre, 308 West 46th Street (just west of Eighth Ave.) Tickets are available through www.RuthlessTheMusical.com or by calling 212-239-6200.