Shea Madison is no stranger to the entertainment world. This actress was born into a world of rehearsal rooms and stages so it’s no wonder that she grew up to grace the New York City stages with her own talent. Flavoring every role she plays with just a touch of her rock star edge. 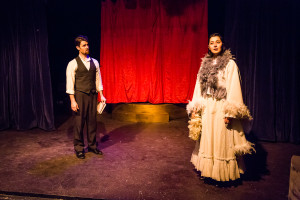 Shea Madison and Sam Durant Hunter as Nina and Treplev (The Seagull) in Mr. Chekhov and Mr. Porter. Photo by Al Foote III.

Q: Congratulations on your role(s) as Nina/Yelena in MR. CHEKHOV AND MR. PORTER at The Medicine Show! Could you tell us a little bit more about this production?

A: MR. CHEKHOV AND MR. PORTER is a brand-new musical that showcases work from two of the most well-known writers in Theatre History–Anton Chekhov and Cole Porter. The show is a vaudevillian conglomerate of The Seagull, Three Sisters, Uncle Vanya, and The Cherry Orchard with musical scoring by Cole Porter. It’s super fun, family-friendly, and full of surprises! We are playing at The Medicine Show Theatre on W 52nd, Wednesdays-Saturdays at 8pm and Sundays at 3pm, through February 24th!

A: Nina and Yelena are two very different woman. Nina is your stereotypical ingénue. She’s young, naive, and ready to throw it all away for her dreams–even though she isn’t quite sure what those are yet. Nina falls in love quickly and grows up very fast as a result. Yelena is the polar opposite. She’s tough, wise beyond her years, and decides to fall in love to protect herself and her future – choosing to love a much older man for security, both financially and from the other men in her life. In MR. CHEKHOV AND MR. PORTER, these two ladies are intertwined in a way that is super surprising – to bring Uncle Vanya together with Treplev (from The Seagull) to help each other heal from the suffering in the lives they once led.

Q: What is it that drew you to this production?

A: It’s new and exciting! I have yet to be cast in a Cole Porter musical – I have a rock background that is hard for me to escape sometimes and this musical not only gave me the opportunity to play around with a type of role I am rarely seen for, but also the incredible pleasure of workshopping such an amazing and inventive idea.

Q: I know there are many Chekhov and/or Porter fans who will be intrigued by this show. How would you say the re-organizing of the materials to create MR. CHEKHOV AND MR. PORTER has affected the way the work is seen and/or experienced (if at all?)

A: I have always loved Chekhov because his work is so dark, but so relatable. His characters die, have family issues that are deeply rooted in their ancestry, monetary struggles, fall in love with the wrong people, and so on, BUT it’s hilarious. I think a lot of times the missing piece in Chekhov is the comedy. Sure, it’s uncomfortable at times, but so much of the way the dialogue is written is actually super funny, which is where Cole Porter’s music helps out. We have so many patter songs and cute uptempo numbers that are the perfect cherry-on-top of these scenes, as well as some beautifully written ballads that so easily replace dramatic monologues for the same effect. This is really a beautiful work to witness.

Q: Can you describe the moment in your life when you decided you wanted to become an actor?

A: Hmm. The best answer is no, actually! My parents were in a very successful rock band, and being raised in and out of rehearsal rooms must have simply sparked something in me. I can’t remember a time in my life when I thought I would be anything other than an actor. I am very, very fortunate.

Q: Tell us about your favorite New York Moment.

A: My favorite New York moment is every night that I get to walk through the Theatre District after a show, whether it be my own or someone else’s. There is no better feeling than realizing I’m exactly where I dreamed I would be, doing exactly what I had planned to.