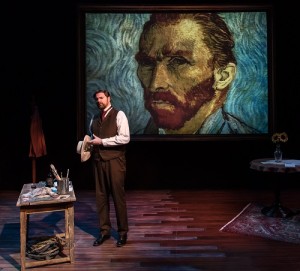 Q: Within the play Vincent  you play both the characters of Vincent van Gogh and his brother Theo van Gogh- Can you tell us a little bit about what that is like; playing both sides of this relationship.

A: The premise of the play is that it is set a week after Vincent’s death. In real life Theo at Vincent’s funeral was so distraught that he couldn’t say anything. So a week later he gathered his friends and colleagues together to say the things that he needed to say. He felt like the record of what his brother’s life was, was incorrect and there were a lot of rumors flying around about his brother. So when I am switching into Vincent technically it is Theo’s remembrance of him so it’s an interesting extra layer of the whole thing; playing someone’s perception of their brother. It is a unique acting challenge. I try not to make it incredibly distinct because the brothers were so alike. There are subtle differences; Vincent was physically more robust than Theo, Vincent had the mental issues and Theo had the physical issues. There is an interesting contrast between them.

Q: You mentioned that the play is based on the real life relationship between these brothers- was the script based on authentic historical letters or documents of communication between and/or around them?

Q: With Vincent being an artist- what was the experience like for you being in a show that brings the worlds of theatrical art and fine art together?

A: I am not an art historian and the show is not an art lecture. Rather, the show is an opportunity to really instruct the audience in much more about what Vincent van Gogh was about and as the director’s notes say Vincent van Gogh lives on as an inspiration to the rest of us because of what he stood for and what he created. It transcends the story of this small individual going through mental illness and it’s a much larger story that relates to the rest of us. The show has a large projection screen and the show has art running throughout the entire play and it’s not like Theo is talking about the artwork but it highlights what’s going on and it follows the chronology of Vincent’s first, earliest drawings when he was actually a preacher. You see some of his earliest sketches which so many people haven’t seen before and you see the progression through these sketches into what is known as his “potato eater” period and you see his growth into color oil paintings. It is really a remarkable series that you see throughout the entire play. A lot of critics have called the show a wonderful merging of theatre and visual art because you get both of those things. It is not an art history lesson though, it is really about Vincent the man.

Q: Can you talk a little bit about Starry Night Theater Company ; what inspired you to start it and is it a coincidence that the name of the company is the title of one of  Van Gogh’s most famous artworks?

A: I was a theatre major in college and then went into a graduate actor program and I was a professional actor a few years after that- this was back in the 90s- then I decided to go to law school and I was a practicing attorney for ten years and while I liked being there I didn’t love it. There was always this sort of pull at me to get back into that creative world- the performing world. I decided to give up my law career and go back into acting. I decided after doing another show that I wanted to start my own theatre company and I started reading different scripts deciding what it was that I wanted to do. I was shaving one day, looked at myself in the mirror and thought ‘ I kind of look like Vincent van Gogh’. I had just seen the movie Amadeus about Mozart and that had started as a play as well. So I googled Vincent van Gogh play and this Leonard Nimoy play pops up. So I ordered a copy of the script and immediately fell in love with it. Van Gogh was an artist I had always loved- as a kid I had a poster of Starry Night above my bed. I decided that’s what I wanted to do and as I was thinking through it I thought what better name than Starry Night Theater Company for my first production named after his most famous artwork and something that I connect to from my earliest years.

Q: You mentioned that you studied law. What kind of law did you practice and do you feel like that experience helped you in starting and running your theatre company?

A: I initially started working in the corporate law world in Boston- I was at one of the biggest firms in Boston and that wasn’t really for me and then I joined a smaller company back out in the Berkshires where I grew up and I was doing a lot of estate planning and administration and things like that. So while the actual practice of law doesn’t really relate, the thing that does really carry over and I think is so closely related to both law and theatre is just the way you say a word can change the meaning. So you have to pay attention to the small details. The reading in law school is very dense so you have to slow down and take in every word and I think acting is very much the same approach: you have to be so specific about what everything means.

Q: Would you have any advice for those in the creative world or not who have the desire to start their own theatre company ?

A: I think first and foremost is go for it. Find something that speaks to you and find a way to make it happen because to me this doesn’t feel like work. Going to a law firm everyday felt like work to me. Again, I didn’t hate it but I didn’t love it and I didn’t feel like at the end of the day that it was something that got me excited and this does. I love to do it. This show is not a musical, it’s not a comedy, it’s a one person show…it doesn’t appeal to everybody and yet the people who come tend to really enjoy it and that’s why I really love it. I love performing the piece and I love to hear back from people how much they learned. You know, it’s kind of a cliche ‘follow your passion’ but there is some kind of a truth to it. If you can find a way to make it happen you are extremely lucky.