It was an evening filled with laughter and talent. All eyes were on the young performer when Tori Murray stepped foot onto the highly reputable Feinstein’s/54 Below stage, on the 29th of March, 2016, with her own ‘one-girl’ show entitled ‘Ready or Not, Here I Come’. The show was produced by Evan Sacks and directed by Dan Foster. 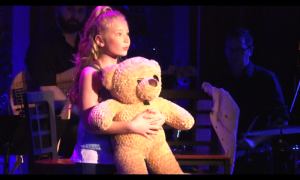 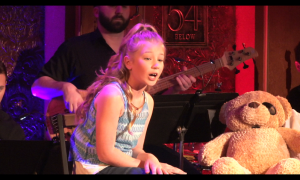 Murray, at age eleven, set a record; being the youngest solo performer at Feinstein’s/54 Below. However, Murray did not let her youth hold her back. She stood her ground belting out such iconic songs as ‘Don’t rain on my Parade’, ‘You’re Never fully dressed without a Smile’ and ‘My Strongest Suit’

Murray’s magnetic stage presence kept the audience captivated through the ups and downs of a young girl desperately seeking ways to grow up while realizing that letting go of one’s youth is perhaps not all that it’s cut out to be.

The script, written by Murray and her father, Tom Murray, was not only well written but also age appropriate without losing universal appeal.

The audience listened, laughed, sang along and some even cried as they were transported through the emotional landscape of a young girl on the brink of letting go of her childhood before her time.

Many musical moments stood out in this stellar performance namely; ‘It’s my Life’ (Bon Jovi), ‘When I grow Up’ (Matilda) and ‘100 Years’ (Five for Fighting). The musical direction (Jason Wetzel) and vocal arrangements (Thomas and Linda Smargiassi) were exceptionally well done which lay the foundation of the show instead of merely complimenting it.

Murray is not only a strong vocal talent but a nuanced actor as well; a poignant moment in the show was when Murray was about to get rid of her best friend, a stuffed bear, Basil. Basil had been with Murray throughout the performance and she had led the audience so much into her world that they had all fallen in love with Basil. So much so that when she was about to put him away in a chest there was an audible gasp from the audience. It takes a lot of talent to get a crowd of New Yorkers to not only believe in an inanimate object as somehow holding human qualities but then to also lead them to fall in love with him.

Murray did an exceptional job declaring that she is here. If you’d like to see this talent performing in the flesh see her at St. Luke’s Theatre as Tina Denmark in Ruthless! The Musical. http://www.ruthlessthemusical.com